Sprint completed the 2Q - 2013 earning call this morning providing a few details about their plans for Clearwire's 2.5 GHz spectrum.

Sprint intends to overlay all of the 38,000 cell sites with the 2.5 GHz spectrum.  Clearwire has stated previously that 40% of their 16,000 sites are at the same towers as Sprint.   Steve Elfman clearly stated that the 2.5 GHz network would have a higher cell density, guaranteeing that 2.5GHz only sites will be prevalent in Sprint's network.  Sprint has clearly signaled a return to the original Clearwire vision of a seamless, high capacity, high speed, wireless network.

Let's go through the site numbers:

2) 40% of Clearwire site (6,400) are located at the same tower as Sprint.  Will Sprint move these sites onto their tower lease and back-haul?  Saving the additional tower lease makes sense, but shifting the back-haul capacity from the "free" microwave back-haul, to Sprint's lease circuits would be adding a large and growing expense to Sprint's bottom line.  A mis-understood fact on the wireless carrier back-haul is that although they will describe the back-haul as fiber back-haul with "unlimited bandwidth", the carriers are typically paying for bandwidth services delivered on fiber.  This means, a 100 Mbps back-haul circuit is provided to the site on fiber for a cost based upon the back-haul capacity (100 Mbps).  If Sprint added Clearwire's traffic to there existing back-haul, they would have to double or triple the capacity, probably doubling their overall back-haul expense.

Steve Elfman also made some interesting comments related to Sprint's 800 MHz spectrum (iDEN).  He felt it was important to deploy for in-building penetration.  I am still waiting to hear if there is a significant deployment of Sprint's 800 MHz spectrum in rural areas (with CDMA and LTE).  If you look at the Virgin Mobile coverage maps, you can see the landmass covered by Sprint's network. 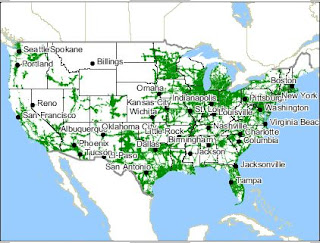 Expanses (non-green areas) in the West/Northwest and Southeast could utilize a Sprint 800 MHz greenfield build.  I continue to believe that the primary benefit of lower band spectrum (600,700, Cellular) is coverage in less dense areas.  I don't believe that there is a significant different building penetration improvement at the lower frequencies.