In listening to the wireless carrier earnings calls for 4Q2012, many of the analysts are interested in the timing for offering VoLTE.  VoLTE stands for Voice over LTE, in other words, Carrier VoIP.  It is unclear whether the carriers are looking at this as a launch of a handset supporting only VoLTE or whether it is essentially a dual-mode handset providing VoLTE where the quality is acceptable and traditional 2G or 3G voice everywhere else.

There is no doubt that 4G speeds enable VoLTE and all of the other VoIP over-the-top (OTT) providers like Skype, OOMA, and GoogleTalk.  Carriers will have the ability to better control their customer experience with their VoLTE service since they can change the QOS settings because they can identify the data as a voice call.

I believe that Verizon has essentially stamped a date for their networks being 100% VoLTE for voice as the same 2021 data for shutting down CDMA.  This is a reason time frame for networks to mature so they are capable of supporting VoIP seamlessly across the carriers footprint.

A key consideration that is not openly discussed, is the fact that the traditional wireless carriers that began as wireless voice providers have only overlaid their 4G data networks on top of a network that was originally designed for voice.  This is important because capacity is impacted differently on a voice network than a data network.  A voice user, whether 100ft or 4 miles from a site, essentially consumes the same amount of voice capacity.  A data user, 100ft from the site, is capable of transmitting his data with a high efficient data modulation scheme, which reduces the capacity burden on the cell site.  A user, 4 miles from the site, will receive his data using a more robust modulation scheme with a significant cost to the site's capacity.   In this example the first user transmits his data on a train that has 64 cars for data, while the user 4 miles from the site only has 4 cars to carry his data. 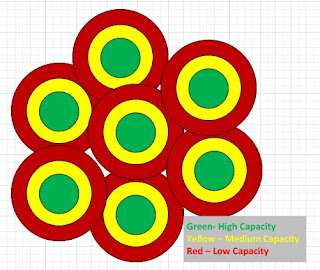 How does this affect VoIP and the launch of VoLTE?  With the diagram above I have indicated the areas of each cell site that will have high, medium, and low capacity based upon their voice network design.  These are the areas that VoIP voice quality will suffer due to lack of coverage or capacity.  With each carrier only offering LTE on one channel, the option to add additional spectrum to solve the capacity issue is not available.  Carriers are pursuing small cell solutions to meet this capacity need but it will require extensive time to mature the networks to support VoLTE and VoIP on a standalone basis.