With the news that Verizon is beginning to turn up some of their AWS spectrum with LTE, I will examine the spectrum available for those LTE deployments in the Top 5 CMAs with the Spectrum Ownership Analysis Tool. 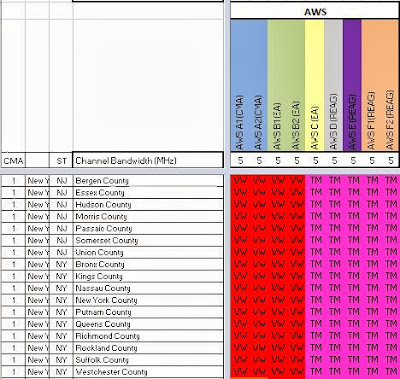 With this analysis, it is evident that Verizon will top out at 223 Mbps across all of the counties in the New York CMA. 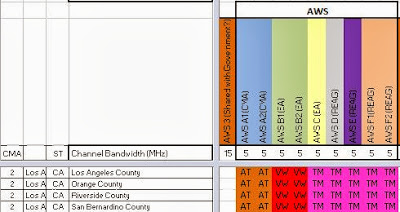 In Los Angeles, I would expect Verizon to be deploying a 10 MHz LTE channel until AT&T has shifted its LTE usage of this AWS channel to it "new" 700MHz B band holding.

At this point Verizon is limited to 2 - 10x10 channels or 146 Mbps throughout the Los Angeles CMA. 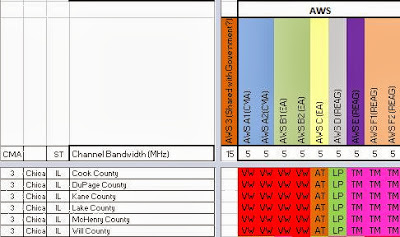 This combined with Verizon's 700 MHz C-band (10x10) channel will provide 223 Mbps throughout the Chicago CMA. 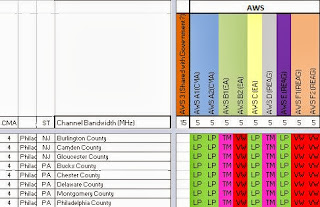 In Philadelphia, the largest channel Verizon can form is a 10x10 channel.  When AT&T gets control of the Leap spectrum assets, I would expect a three-way spectrum trade to allow Verizon, T-Mobile, and AT&T to rationalize their AWS spectrum positions.

For the throughput analysis, the additional 5x5 channel that Verizon can form in the AWS frequency band is included with the 2 - 10x10 channels (AWS and 700) for a total metro throughput of 183 Mbps.
Detroit: 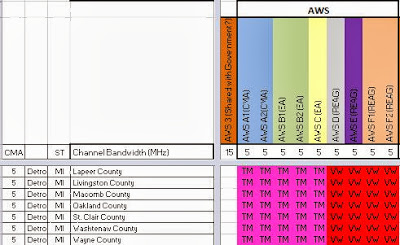 In Detroit, Verizon can again form a 20x20 AWS channel.

In the Detroit CMA, Verizon can achieve a metro through put of 223 Mbps.