With the conclusion of Verizon's investor call, I thought it would be worthwhile putting together some facts behind Verizon's statement that they have accumlulated 40MHz or more AWS spectrum in 92 of the Top 100 markets.  Unfortunately, they don't define the markets, but from AllNet's Spectrum Ownership Analysis Tool, we have compiled Verizon's AWS spectrum holdings based upon CMA markets.  The markets below 40 MHz include:  San Juan, Charlotte, Raleigh, Greensboro, Oklahoma City, McAllen, Springfield, and the New Jersey 2 market.  This matches Verizon's statement of 40MHz of AWS spectrum in 92 of the Top 100 markets. 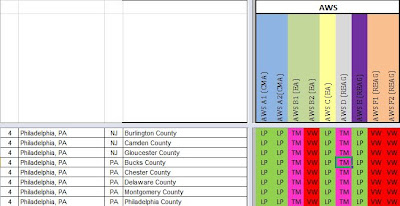 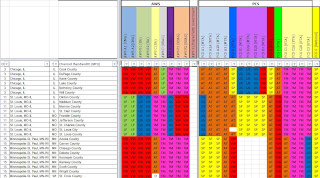 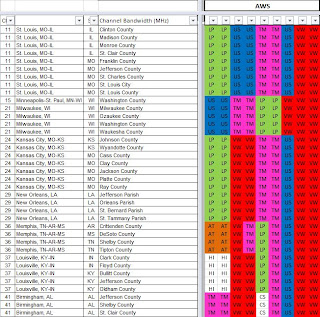 
Below is a link to an Investor's Presentation provided by AllNet Labs detailing the licensing, geographic, and leased versus owned challenges of Clearwire's Spectrum.

Clearly the wireless industry has locked in spectrum pricing with the MHz-POP pricing model, but is this the right way to look at it as we move into a 4G World where data throughput and capacity are key?  For those that aren't familiar, the typical value of spectrum is determined by the $/MHzPOP which is the dollars spent for the spectrum divided by the total amount of spectrum times population that spectrum covers.  This model falls short now as carriers are interested in acquiring larger contiguous blocks of spectrum enabling higher users speeds and more capacity.

To use a real estate analogue, a large plot of land is much for flexible for multiple uses, than two plots, even if they are in the same neighborhood.  In real estate, the developer that is able to consolidate several tracks of land into a larger development is rewarded as he sells the larger development.

In the wireless industry, we continue to price based upon the $/MHz POP basis, even as carriers such as T-Mobile and Clearwire have combined adjacent channels to create larger bands of spectrum to utilize in larger LTE channels.  T-Mobile has worked this year with Verizon, SpectrumCo, and MetroPCS which will allow it to assimilate a 2X20MHz LTE channel on a national basis.  Clearwire has leased and purchased operators in the BRS and EBS spectrum bands providing it with an average of 160MHz of spectrum in the top markets.  Since Clearwire's spectrum has many geographical boundaries, it is difficult to say how many 20MHz channels they could support across each of their markets, but they have been successful consolidating small bands of spectrum into larger more flexible spectrum bands.

How does a larger band of spectrum affect the wireless carriers?  In the US, carriers have deployed FDD-LTE in 1.25MHz channels, 5MHz channels, and 10MHz channels.  As you increase the channel size throughput performance improves because a lower percentage of the data packets are dedicated to overhead activities   Qualcomm has provided achievable LTE Peak Data Rates for different channel bandwidths based upon whether the antennas are 2x2 or 4x4 MIMO.

As you can see in the 4x4 MIMO downlink case, the throughput is 12Mbps greater in the 20MHz channel than the composite of 4-5MHz channels.

So if a  20MHz channel is 4% more efficient than 4 - 5MHz channels should the MHz POPs pricing adjust accordingly?

By the way.. I am going to look for more source data on the capacity improvements for wider channels, a 4% improvement would seem to be relatively negligible.  I recall hearing 30% improvements in capacity when a channel size is doubled, but I haven't been able to re-source that data for this blog.   More to come.