Defining the Commencement of Operations in the 600MHz Band

Click the link above to review the FCC's initial proposal for the shutdown of low power and unlicensed operations in the 600MHz band.

Yesterday, the FCC approved a Channel 51 transition in Lansing, MI.  The movement of this TV station from Channel 51  to Channel 25, will eliminate the adjacent channel interference risk to T-Mobile's 700MHz A-Block spectrum in Detroit.  Below is a listing of the currently filed Channel 51 transitions.  Each of the Daily Digest dates is linked to the filed information. 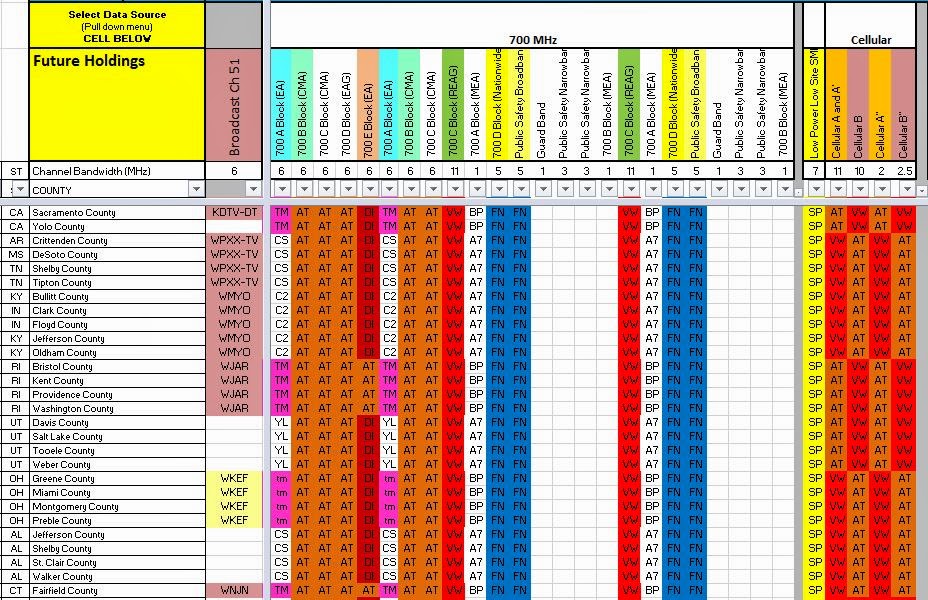 The news yesterday that T-Mobile and Sprint are forming a Joint Venture to buy 600MHz Broadcast Incentive Auction spectrum shows a shift in the way that both Sprint and T-Mobile look at the places that aren't  in non-Top 100 markets, along Interstates, or along US Highway routes.

Will the T-Mobile/Sprint JV use this low band spectrum to fill out the areas that they rely on partners (primarly AT&T and Sprint) to provide their coverage?

Virtually all of T-Mobile's recently acquired 700MHz A band spectrum is in large cities (see my post from 11/2013) and Sprint has been reluctant to add towers in rural areas to utilized the 7MHz of low band SMR spectrum that they are using elsewhere for their Spark service. 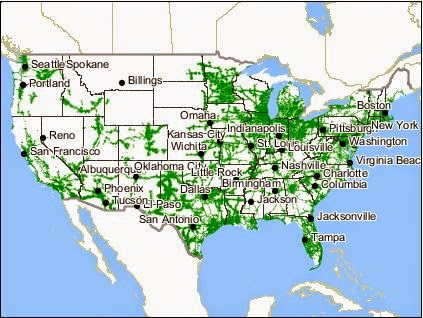 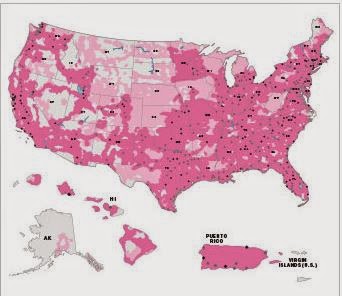 T-Mobile has signaled with the FCC that they are concerned about reasonable roaming rates and Sprint is clearly in the same position with Verizon, needing Verizon's coverage to offer true nationwide coverage.  On the other side of the coin, T-Mobile indicates that they already cover 96% of the US population, leaving about 12.5 million POPs to be covered with this new low band spectrum.

For both T-Mobile and Sprint a build out in these uncovered areas would reduce their risk of of significant rate increases or roaming service elimination with Verizon and AT&T, but these towers would be much less efficient than towers elsewhere in their collective networks.  Obviously they would share the deployment costs and operating cost, but with these towers would have serve a low number of POPS (population)/Tower which is a standard industry metric on capital efficiency for deployed towers.

How would this affect Sprint's recent regional partners?
Sprint Regional Partners
Building out this spectrum would put Sprint in direct competition with these recent formed partners.  These regional partners may also participate in the auction acquiring more spectrum.  Each of these partners only needs low band spectrum for wide area coverage, and there are ample amounts of mid-band (PCS/AWS) spectrum in these areas for these regional partners to uses as capacity grows.

Inevitable.  If you have followed the Sprint/Clearwire saga since they were joined with Google, Time Warner, Brighthouse, Comcast, and Intel; it was obvious that Clearwire had a hard road ahead.  In yesterday's announcement Erik Prusch indicated the depth of the internal concern; Clearwire had retained an advisor to provide options for restructuring.

Once the carrier consolidation of 2012 occurred, the only path forward I saw for Clearwire was funding minimal operations into the 2014 time frame, with a hope that the other 3 national players would finally need the wholesale access to Clearwire's spectrum. With each of the national players, except Sprint, lining up their LTE capacity growth spectrum, the need for wholesale access to Clearwire's WiMax or planned TDD-LTE network was unnecessary.  Clearly Sprint needed Clearwire for its LTE growth spectrum and at $0.21/MHzPOP I believe we will look back 5 years from now and view this was steal.  Not only has Sprint put in concrete their LTE capacity growth, but they have cornered the market available spectrum for years to come.  When you consider that Clearwire controlled 160MHz of spectrum which could be expanded to nearly 200MHz in most metro areas with additional spectrum leasing and spectrum purchases, Sprint has the only meaninful swatch of "new" spectrum that will come to market in the next 5 years.

I don't see the Broadband Incentive auction, the Dish spectrum, or the recent 3.5GHz spectrum as meaningful for efficient macro network coverage.  Those subjects are covered in other blogs.

The purchase of Clearwire does not guarantee smooth sailing for Sprint.  Sprint still has very significant short term issues.  Their LTE network is 5X5 which is the smallest of any of the national carriers.  In addition, their customers with WiMax devices will continue to transition over to this network as they upgrade their devices.  Clearwire's TDD-LTE hotspot network is only at the construction start stage, with likely very limited coverage throughout 2013. Clearwire has talked historically about devices arriving for this network 2Q or 3Q 2013.  Thus, there won't be any material movement of traffic from Sprint 3G or LTE network until early 2014.  From what I experience on my Sprint Samsung S3, the 3G network is already challenged and LTE is not available in my market (Seattle).  It will get worse before it gets better.


Below is a link to an Investor's Presentation provided by AllNet Labs on the upcoming Broadcast Incentive Auctions and Whitespace Spectrum.

Will Rural America get a 3rd National Wireless Provider? Posted on Wed, Jul 16, 2014