Although it surprised the wireless industry a bit, it does make sense that Sprint saw a declining value in the H block spectrum.  Acquiring that spectrum would have allowed Sprint to expand their primary LTE Channel from a 5x5 channel to a 10x10 channel. In terms of Mbps, from 37 Mbps per sector to 73 Mbps per sector.  If this could be added to the network today, it would bring Sprint to about par with the other 3 national carriers.  The problem is timing.  It will be mid-2014 before the spectrum will be awarded to the auction winner, but prior to receiving the spectrum, the high bidder could start the 18-24 month process to get the LTE band classifications changed.  Sprint would either have expanded the frequencies for their band 25 or requested a new band classification that would include all of the old PCS block, the PCS G block, and the PCS H block.  With the standards body work, including carrier aggregation, it would likely by early 2016 before network upgrades would begin.  This coincides with their forecasted completion of Project Spark.  If Sprint completes this project on-time, they will have 38,000 sites that will be enabled with 40MHz of 2.5GHz spectrum, which could be a game changer.  This does seem to signal that Sprint doesn't think their PCS G LTE is particularly strategic. 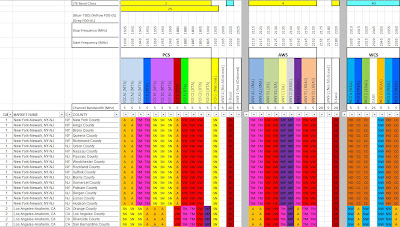